Bram Stoker’s timeless character Dracula gets an origin story that’s gonna be EPIC, if the trailer is to be believed. It shows a young Dracula trying to protect his wife and child from forces bigger than himself. This makes him turn to the dark side himself, and thus begins the bloodline that has intensified the very foundations of the mystery/horror/drama genre. Take a look for yourself!

PS: Doesn’t it look like they have taken a leaf out of the stack of The Dark Knight trilogy posters when designing Dracula Untold’s poster? *nudge, nudge, wink wink*

Dracula Untold is scheduled to release on 17th October, 2014

After 24 and Homeland, its Tyrant for producer Howard Gordon. Undoubtedly, the Arab world has become a hot topic not just for the media, but also for TV series producers looking for a lucrative yet engaging plot, with a message. Only this time, the show runners have created a fictitious country of Abbudin, with a history and political scenario much like any Arab country that you may come across in your newspaper’s headlines.

Bassam ‘Barry’ Al Fayeed (Adam Rayner) is the son of the leader/dictator/king/president (phew!) of Abbudin. However, he lives in Los Angeles with his wife and family, due to ‘issues’ with his father for almost two decades. Seems like daddy issues don’t just mess up hot strippers and bottle blonds! Anyhow, his nephew’s wedding beckons, and Barry takes a much detested trip back home on the insistence of his wife and son, and much to the chagrin of his daughter. Everything isn’t hunky-dory back home, protests and attacks are rampant, even threatening his nephew’s wedding. Things take a turn for the worst when… wait, no spoilers! 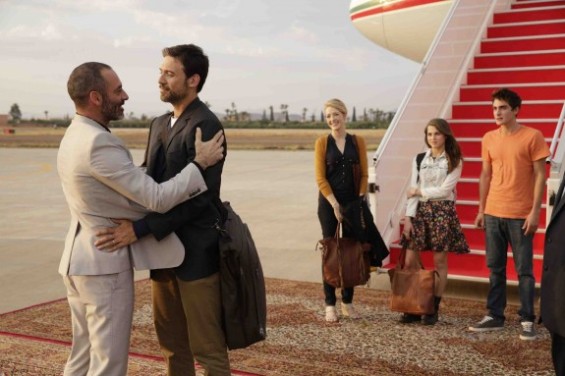 Tyrant seems legitimate enough, with the dusky and sandy streets of Abbudin, and you constantly have that prickly feeling at the back of your neck and in the bottom of your stomach that things are going to turn nasty soon. The show runners obviously want to keep away from naming names and at the same time be as accurate as possible, taking cues from past and current global events.

The only issue I had was with the costumes and the lack of ethnic wear, even during the wedding. Having been brought up in the Middle East I know for a fact that they would not constantly wear tuxedoes and gowns, at least not to a royal wedding; that’s just not how they roll, honey!

Tyrant is a far cry from Homeland, with the obvious glamour and fictitious settings. I am not completely sold on the show after viewing the premier, let’s wait and watch. 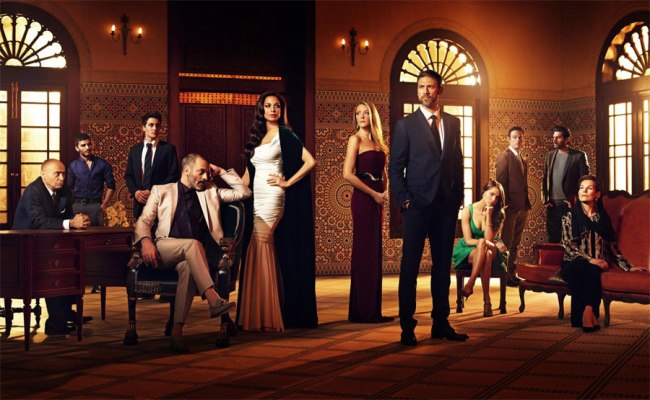 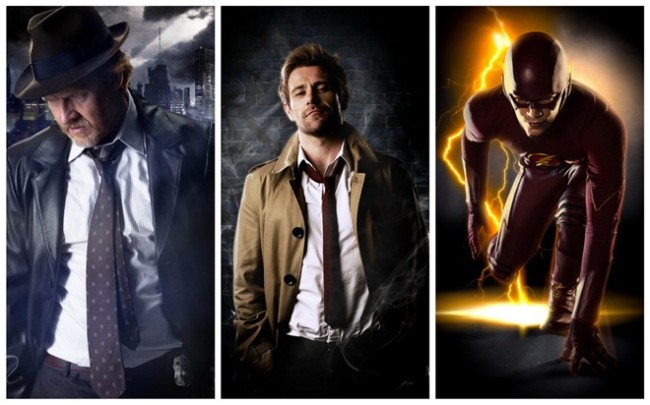 It is basically going to be Christmas this fall for DC Comics, with some of its better characters and stories being retold on TV. With Arrow doing so well, and three hopefully amazing and highly anticipated shows set to premier this fall, DC Comics is back in the game and how! Here is a slight yet breathtaking preview of these exciting shows:

After The Mentalist, Bruno Heller is back in business with Gotham. This is undoubtedly going to be one stunning show, as its set to depict the story of Gotham in its early days, before the Batman. Detective James Gordon is going to be the central character played by Ben McKenzie, and the show will also revolve around the stories of Bruce Wayne, Riddler, Catwoman, Joker, Two-Face, Penguine, Scarecrow, and Poison Ivy before they became the people they grew up to be.

Fans of the comic Hellblazer, listen up! John Constantine played by Matt Ryan is soon to light your television set on fire, or at least the monsters in it. This is also going a treat for fans of the show Supernatural, as the concept of fighting the unknown and the ‘supernatural’ is predominant in Constantine as well, only, there is going to be magic involved!

Even though The Flash is a spin-off series to the already hit show Arrow, this doesn’t prevent the fans from rooting for the show with all their might. Barry Allen, who portrays The Flash has already been spotted on Arrow, where he has been struck by lightning. What is it that they say about what doesn’t kill you only makes you stronger?!

When I started watching Once Upon a Time, I was fully prepared for it to be one of those guilty pleasure shows that I would soon tire of and give up on it even before the end of the first season. What with all the fairytale links and pretty princesses, I presumed the show would be one to please the air-headed masses. Alas, I was oh so wrong. Till date, Once Upon a Time is one of the most inspiring, teaching, and well-depicted show I’ve ever come across. If there was ever a show that reminded you of your childhood and yet gave you a dose of reality in an in-your-face manner, then this is it! Here are some of the reasons I think this show MUST be watched EVERYONE who is human; hell, even get your dog to watch it, if possible!

Strong Female Characters: When you hear that this show is a cross between fairytales and the real world, it wouldn’t be a stretch to assume that there would be cute little princesses, with innocent, docile smiles, and a demure attitude. Well you thought wrong! All, I repeat, all the female characters in Once Upon a Time are not in the least bit docile. If I had a penny for all the times Snow White saved Prince Charming’s nether regions, I would be a rich gal indeed! And its not just Snow, its every woman on the show, they just wont sit around in their ivory towers waiting for princes to rescue them. Instead, they fight, for themselves, for people they care for, for the general good for everyone; sometimes even to serve themselves, but what’s a good story without a good old-fashioned villain, right?! Its such a strong message for all the girls and women out there, to take charge of their own lives, and to all the people who say Disney princesses set a bad example, go home!

Real-life Lessons in the Fairytale World: Once Upon a Time is full of invaluable lessons that make so much sense even when applied to our real world. If you only open your eyes and ears, there is so much that you could learn. Its a show you can watch with your kids without having to endure explicit and unsuitable scenes. The most important thing I have picked up from this show is that good intensions don’t always make for good results. Sometimes, even when you have the purest of intent in your heart, you could end up doing immeasurable harm to someone, without meaning to.

Parenting 101: There are some interesting takes on parenting in the show- it depicts how kids tend to bring out the best in their parents, even when the entire world has given up on them. Its about teaching your kids the importance of being their own person, even when society, media, and the entire world says otherwise. And sometimes, your kids can make you aware of things that you had no idea you were capable of.

Round Characters: In literature, the term ‘round characters’ means characters who start off with a specific personality, and then change as the story proceeds, influenced by circumstances. Here, characters like the Evil Queen who is inherently bad, and spiteful, along with Rumpelstiltskin, who is equally cunning and manipulative, change for the better, owing to a number of factors. There is a sliver of good, however tiny, in everyone if only we attempt to find it. Despite all the things that once went wrong, all we need at the end of the day is someone willing to bring that sliver out and turn it into a full-blown rainbow of goodness. 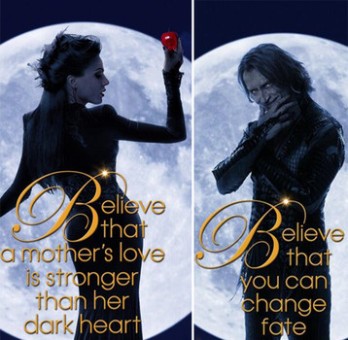 Hope and Cynicism Wrapped Up in a Neat Lil’ Bow: Just because the show is all about fairytales and magic, doesn’t mean that its always hunky dory. The characters have real problems, and experience times of despair that make it so much more relatable, that you will surely find at least one character who’s experiences you will associate with. This keeps things real and so much more interesting than it would have if it was always sunshine and daises all year long.

Brilliant Plot, Casting, and Sets: Once Upon a Time brings back to life all the fairytales that you once adored, with style! The casting is so brilliant, it seems like the entire universe conspired to bring these amazing people together in this enigmatic show to portray their respective characters. Its an absolute pleasure to watch the Enchanted Forest and Storybrook so carefully created, keeping the tiniest details in mind.

It took me a while to figure out exactly what I felt after watching X-Men: Days if the Future Past, hence the delayed review. Agreed, some of the effects and the mutants were fantabulous, but that didn’t prevent the movie from being a bit of a drag, especially when featuring the past.

Presently, all of humanity, or what’s left of it, has waged a war against mutants, and humans who possess mutant genes. The elite few, Professor Xavier, Storm, Wolverine, and Magneto manage to avoid the attack of the Sentinels with the help of Kitty Pryde’s powers that help her project anyone’s consciousness back in time. Once its obvious that the only way to prevent the mutants from going extinct, and avoiding this war is to alter the past and avoid that one event that lead to the domino effect, causing humans to fear and rise up against the mutants. 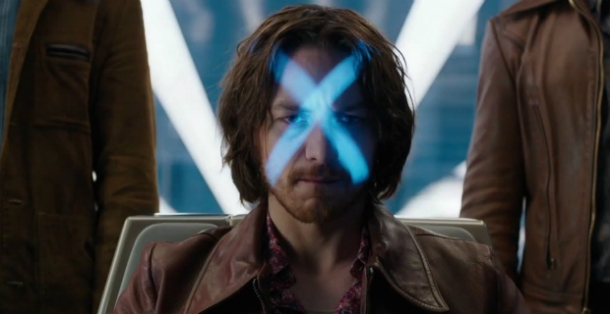 While the storyline is an improvement on the previous X-Men instalments, it still lacks the ultimate ‘wow’ factor. Maybe this could have been remedied if the cooler mutants along with the ingenious and diabolic Sentinels would have been given more screen time. Jennifer Lawrence seems to have become the undisputed princess of the Geekverse, and rightfully so. James McAvoy brilliantly portrays the younger Professor Xavier, pat down to all the struggles and the personal battles that his once tormented mind underwent; making him the man he is today.

However, despite possibly having one of the smallest role to play, Quicksilver (Evan Peters) steals the show, and with such ease! Ask anyone who’s watched the movie what their favourite scene was, and they shall all have a reminiscent, yet mischievous smile on their face when they say, “The one with Quicksilver in it!”. 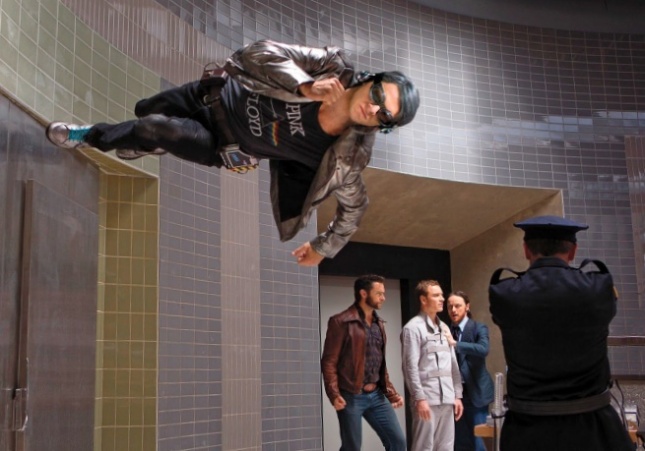 Hugh Jackman is just fine as Wolverine, and yeah, he is my least favourite Marvel mutant, so don’t mind if I don’t sing his praises in this review (honestly, there is nothing to really sing about). A little less drama and fewer wannabe inspirational speeches, and X-Men: Days of Future Past would have made it to the list of one of the better made Marvel movies.